The camera is one feature of the iPad that we so often take for granted. We know it's there and we use it quite regularly. Teachers and learners take photos of their writing in books, collaborative work, artwork and even the information on the whiteboard.  Videos too are being taken to record learning, practice a language, or document an achievement. On just one day this week I saw students videoing a conversation in Spanish, making a stop-frame animation, and recording themselves 'perform' a project. To have this facility in your hand, to use at a moment's notice, is extremely powerful.

Today I showed my class or 12-yr-olds a roll of Kodak 35mm film. The majority had no idea what it was. Somehow it didn't really surprise me. I remember resisting digital photography for as long as I could, but even I had pretty much stopped using film when these kids were only 3! They have never known anything else.

The ubiquity of their iPad camera hit me the other day when my class came back from Science and told me how they'd used microscopes to look at onion cells. When I asked about it they said, "Here, take a look". Without being prompted by their Science teacher (in fact he hadn't even thought of it), the kids took pictures looking down the microscope. And they were surprisingly good too. To them, it was a perfectly natural thing to do...see something cool, save it and share it. And share it they did. Many showed their parents that evening, several blogged it, and one or two appeared on the ever popular Instagram.

This one was taken by Jason. 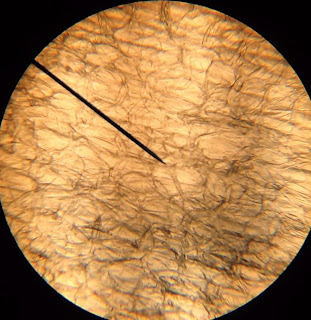 Brought to you by...