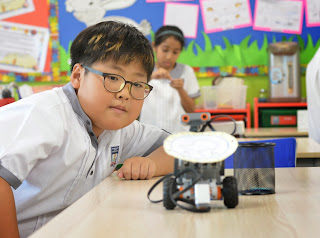 Year 5 are just taking their first steps into the wonderful world of robotics and programming. And it wasn't just the kids who were exploring this for the first time - it's new to some of the teachers too. "I was more than a little apprehensive" admitted one teacher. But these fears soon disappeared, as once again the kids leap in and get on with it. By the end of their first session, they were not only programming the devices to travel around a prescribed route, they also used sensors to detect and avoid obstacles. The robot above was able to zoom along the table top and brake hard as it sensed the edge - stopping every time, with millimetres to spare.

Isn't it great how kids pick new skills up so quickly and once they enthused and excited by something, they'll run with it, often going beyond our expectations. I'm looking forward to seeing what they eventually come up with as they move through their project.
Posted by iPittman at 11:17

Brought to you by...